The rules of golf are complicated in many ways.  While the rule book itself isn’t particularly long, the book of decisions on those rules is quite large, and most golfers aren’t completely clear on many of the rules that govern play.

One rule, however, is as clear as can be…

You are allowed to carry only fourteen clubs in your golf bag.

There are no rules that restrict what types of clubs can make up your set, but you can only have fourteen.

Want to carry all drivers?  Go for it.

Need three putters to deal with the yips?  Not a problem.

You are free within the rules of golf to organize your set in any way that you see fit, as long as the total does not exceed fourteen.

That feeling you get when you hit the perfect club.

Of course, no golfer in his right mind is going to play with all drivers—or with three putters in the bag for that matter.  Most players will use some variation of the standard set of clubs, including one driver, a set of irons, a single putter, etc.  In fact, the set of clubs that is in your bag right now is likely rather traditional.

But is it OPTIMAL?  That is what you need to figure out.

Which clubs you choose to carry in your bag can go a long way toward determining what shots you are able to hit on the course, and consequently what scores you are able to shoot.  If you consistently find that you are faced with shots for which you don’t have the proper club, you’re leaving some opportunities on the table.

The ideal set of clubs is one that leaves you with the right club in your hands for the highest percentage of shots throughout the round.

As you start to fill in the fourteen open spots in your bag, some of the choices are going to be easy.

You need a driver and a putter—so there are two spots filled right off the top.

You also almost certainly want to carry a three wood, so that is another slot taken.

At a minimum, you should carry a set of irons that runs from 6 through PW, which counts for five more clubs.

At this point, there are eight clubs in your bag, and there should be no doubt that those clubs are safe.  That leaves you with six spots available to be filled.

Among those six spots is going to be some combination of fairway woods, hybrid clubs, long irons, and wedges.  The final mix that you settle on will depend on your ability on the course, your personal playing style, and the types of courses that you play.

With your six open spots, you are going to want to add three long clubs and two wedges (we will worry about that last slot later).

If you were to go with less than three more long clubs, or fewer than two more wedges, your set would be too lopsided and you would be vulnerable to a variety of shots on the course that you would have no answer for.

The following is a quick discussion of how you should pick out just the right long clubs and wedges:

The traditional way to fill the three open slots for long clubs would be to add a four and five iron, along with a five wood.  There is nothing wrong with that approach, and feel free to go down that path if it works for you.  However, the advent of the hybrid club has created yet another option.

Long irons are difficult for many players to hit, especially those with a slower swing speed.  The key is to understand and be comfortable with your skill level and personal preferences.  There is no point in carrying a club that you can’t hit, so feel free to replace your long irons with hybrid clubs if they help you perform.

You can even choose a hybrid club in the 18 degree range instead of a five wood if you decide that hybrids work better for your swing.

For more on the science of long clubs be sure to check out our Hybrids vs Long Irons article here.

The key to choosing your two wedges is making sure there are no large gaps in the yardages that you can cover.

First, figure out how far you can hit your pitching wedge with a comfortable full swing. For an example, let’s say that number is 110 yards, from there, you want to make sure your next wedge in line will fly around 95 yards.

A 52 degree wedge is a popular choice, but 54 degrees could work as well.

Finally, your highest lofted club should be able to cover around 75 yards in the air (for this example).  That may mean you choose a 58 degree, or you may go all the way to 60 degrees. 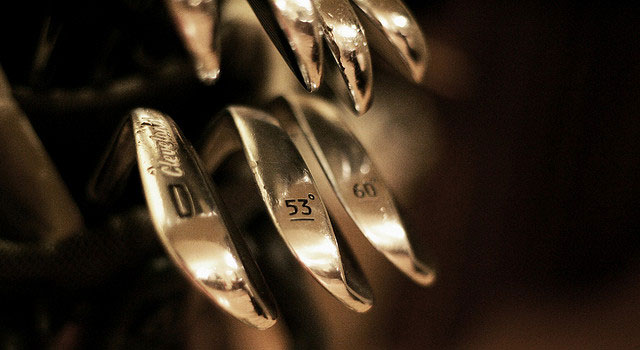 Wedges come in a wide range of degrees. Choose wisely! Photo by CJ Anderson on Flickr.

The key here is to make sure you don’t leave an large distance gaps so that you’re not forced to dramatically over-swing or under-swing in order to hit any crutial distances in the 75-125 yard range.

If you want to explore this topic deeper jump over to our recent article on Choosing the Right Degree Wedge for Your Game here.

If you have settled on three more long clubs and two wedges to add to the original eight, you will be left with a single open slot in your bag.

This club could be another long club, or it could be an additional wedge.

This is where you need to take into account the type of courses that you play.  If you play long courses that consistently challenge you with lengthy par threes, an extra hybrid or fairway wood could come in handy.  On the other hand, if you play short courses which demand accuracy around the greens, an additional wedge is probably the way to go.

Think about your own game, and the courses that you play, and choose wisely.  It might be a good idea to actually have fifteen clubs available so you can switch between the extra long club and extra wedge depending on the course you are playing that day.

Just remember to take that 15th club out of your bag before teeing off!  Having an extra club in your bag will result in a penalty of two strokes per hole, so always double-check your count before heading out.

Building your set properly is an important part of playing your best golf.

Take some time to build your set around the style of golf that you play, and your scores should be better for the effort in the long run.